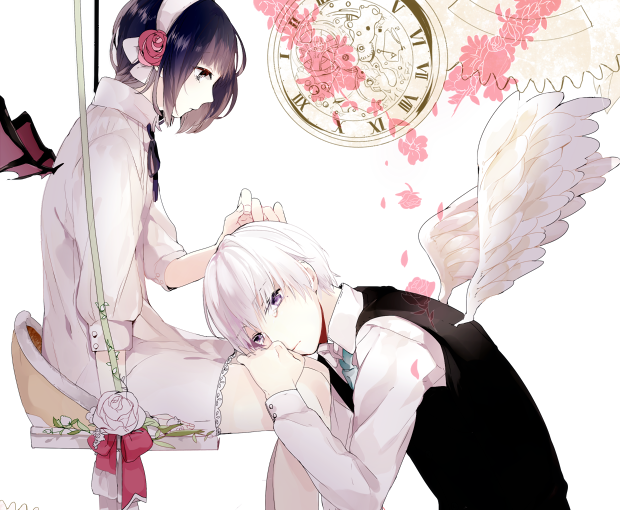 I don’t say it just to brag.

If they were just “normal” coincidences, then I wouldn’t have bothered counting them, would I?

The guy that tried to bully me ate a mosquito while he was shouting.

I always give a random answer in the tests and they are never wrong.

A passerby in front of me dropped just the amount of money I needed to buy ice-cream.

I could go on and recall each and every coincidence, but that would be a waste of time.

In the end, what I want to say is: I am God. The God of Coincidences.

So, is it a coincidence that I’m lying here, on a bed, bleeding to death?

It all started that normal morning full of coincidences…

‘It’s the first time the alarm didn’t wake me up, guess today I had to be late or something.’

Gabriel continued to walk down the street normally, until he saw the usual crossroad.

‘Before, I never bumped into someone… I hope today is my lucky day~’

And he did in fact bump into someone at the crossroad. They both fell down, but coincidentally, the asphalt under Gabriel’s backside was slightly softer and cleaner, not causing any harm to him or his clothes.

Looking up, Gabriel saw a girl so beautiful that he forgot to breathe. It was the first time he found a girl so attractive. She had silver coloured eyes, dark-purple hair and an almost white skin. Her half-closed eyes gave her cute face an aloof and mature appearance.

Gabriel immediately noticed that she wore his school’s uniform. He stood up and offered her his hand, which she accepted.

Gabriel remembered each face of all the students and teachers at his school, so he was certain the girl before him was a transfer student.

“My name’s Gabriel, what’s yours?”

He said while he gave her the most sincere and reassuring smile he could muster.

The girl looked at him for a moment, no emotion showing on her face, and then replied

The two relaxedly walked toward school, forgetting they were late as they talked.

Coincidentally, Gabriel and Lilith liked the same music, the same colour, the same author and the same subject.

They both hated potatoes, but while Gabriel preferred sweets, Lilith preferred spicy food.

By the time they arrived at school, Gabriel already felt something for the petite girl. She appeared to be 15~20cm smaller than him, meaning she was only 165~160cm tall. Stealthily, Gabriel noticed her breast size to be an A, maybe a B if he wanted to be generous.

At the school’s front door the two encountered Gabriel’s homeroom teacher. Coincidentally, she was going to be part of his class.

‘And the seat next to mine is empty too~’

Gabriel wasn’t punished for arriving late as he had to help the transfer student come here. Lilith made a strange face, maybe one of slight disgust, when the teacher paused a second and then told Gabriel he wouldn’t receive any punishment.

Gabriel thought it was just a coincidence.

The rest of the day flew by, and it was already lunch break. More than half of the students in Gabriel and Lilith’s class went to the cafeteria at the ground floor. Gabriel bought some light sandwich with his friends while Lilith ate an home-made lunch in the class.

When Gabriel came back he saw Lilith was quite busy answering the probing questions of some students.

After school was over, the students began to leave the classroom. Some female students tried asking Lilith if she wanted to walk home with them, but Lilith refused by saying that today she couldn’t do so.

Gabriel finished putting his books and pencil-case back in his bag, he was about to stand up when Lilith grabbed the hem of his school uniform. She looked at him in the eyes and spoke

“Show me around the school, please.”

And so he did.

As Gabriel and Lilith walked around, they encountered various students, some going home, some going to their clubs, some doing homework in class and some just hanging out without reason.

Lilith didn’t seem interested in any of the school clubs, but she did glance at Gabriel once in a while. His curiosity about her actions reached a level so high he couldn’t contain it anymore.

“What is it? Something strange on my face?”

He asked with a perplexed face. Lilith kept her aloof behaviour, as if she was expecting him to ask that question.

Gabriel was rather startled by Lilith’s direct attitude. He blushed a little and before he told her it was okay, a few seconds passed. Once he gave the okay, Lilith nodded and said

The two walked to the school’s garden and Lilith sat on a bench near an oak tree. There was a slight breeze that refreshed the air and made the trees’ branches move slightly. Lilith looked at Gabriel in the eyes and patted her laps. Gabriel couldn’t believe it.

Lilith nodded. Gabriel laid on the bench on his side, his head on her lap, so he wouldn’t face her. In front of him there was the garden and not once did he look away, certain he’d blush even more if he stole a glance at Lilith, who was currently passing her delicate fingers between his hair, caressing his head.

That practice lead the entire school to believe the two were lovers, a rumour that was easily proved wrong after some students talked with Lilith and Gabriel. Gabriel would just say “It’s nice, so why not?” while Lilith replied “I like his hair.” Which lead all the students wondering as to why they weren’t a couple.

Some time after that, one day, Gabriel began to lie on the bench on his back. He would stare at the sky for a while and then he would observe Lilith until her eyes focused on him. Happy that he managed to get her attention, Gabriel would smile silently before he went back to staring at the sky and its clouds.

The next change happened a week or so later, when Lilith began resting the hand she wasn’t using to pet his head on his chest, directly above his heart.

She said before Gabriel could talk.

At that point, no one believed them any more when they said they weren’t going out.

Said Gabriel after Lilith had smiled back at him, for the first time, when he was about to start staring at the sky again. Her smile felt mesmerizing, intoxicating, and at that moment, Gabriel thought he’d do anything just to see it again.

Walking down the main street, the two passed by many shops, houses, bars, restaurants and other things. Gabriel was walking Lilith home after their date. It was around evening, it was dark but not so much that the street light had to be turned on.

Coincidentally, a couple was walking in front of them and the man dropped a coin.

Gabriel bowed down to pick it up and just as he did so he heard two things. The first, a swish typically made by sharp objects, the second thing was a woman clicking her tongue.

At the same time he touched and grabbed the coin, he felt warm rain pour on him.

He straightened up, wanting to visually confirm it was raining.

The man that had been walking in front of him was now missing his head and the woman was on the ground screaming. Gabriel unconsciously frowned as he felt his stomach twist, so much disgusted by that sight he wanted to churn out the food he had eaten.

The first thing Gabriel did though, after realizing the situation, was to cover Lilith. He never was the athletic type and didn’t have much force. He never practiced martial arts, much less trained in something. He disliked sports too.

He would protect the girl he.. loved.

Lilith made a surprised face when Gabriel embraced her, not that he saw what face she was making. She knew him well, very well, so this action puzzled her.

‘Why is he protecting me?’

Later, after they had discussed with the police and gave their testimony, the two were free to go back home. Of course their parents had been called, as the two were both minors. Gabriel’s mother met Lilith’s, the two women seemed more shocked that their children had a date rather than by the inexplicable murder.

The day after, when the two were back at school, Gabriel and Lilith were once again on their usual bench during lunch break.

Gabriel lifted his left hand and touched Lilith’s cheek, stroking it with almost the same timing she was caressing his head. Neither smiled as they stared in each other’s eyes.

They continued like that until the bell signaled the end of the lunch break.

A year passed and now Lilith and Gabriel were an official couple.

Lilith invited Gabriel to her home that day, saying “My mother won’t be back until evening.”

Gabriel felt a bit nervous but his happiness surpassed that, allowing him to act normally.

Gabriel was over Lilith, the two were on her bed, when he felt something cold press against the back of his neck.

He recognized that voice. It was the voice of Lilith’s mother. Gabriel looked at Lilith with a perplexed face, but Lilith was giving him an emotionless stare, and not the candid look she had a second ago. Her eyes, in that situation, seemingly gave him shivers.

He felt Lilith’s mother restrain his wrists behind his back with some kind of handcuffs. She then grabbed the collar of his shirt and threw him to the wall. Gabriel slightly bit his lips from the pain.

Lilith stood up and walked beside her mother, who never once stopped staring at him.

“What is happening? Lily?”

Lilith’s mother raised her hand and Gabriel finally saw what had been pressed against his neck, a gun. She pointed it directly toward his head.

“Did you think it was a coincidence?”

Her mother spoke. In response, I just tilted my head. There were just too many coincidences in my life. She rolled her eyes, annoyed.

“… That you met Lilith. Or that a man that was calmly walking in front of you was killed.”

She made a devious grin.

Gabriel, with a shocked face, stared at Lilith. She was biting her lips while looking down, her mother didn’t seem to notice that.

She too had fallen in love for him, and that proved it.

“Well, anyway now that you are here, you won’t be able to twist the world’s fate to your liking anymore.”

She shot and missed. She clicked her tongue and spoke again.

Gabriel opened his eyes, he had closed them when he heard the shot, and saw tears forming on Lilith’s eyes.

This time Gabriel steeled his will to not close his eyes. He stared at Lilith and she stared back at him. She had grabbed the ends of her shirt, holding them as tight as she could.

Gabriel grit his teeth. His mind couldn’t think of anything but “pain.” He continued to look at Lilith, who had finally began to cry.

Without noticing, he cried too.

Lilith’s mother went away, coincidentally not noticing what was happening.

Gabriel slowly slid until he lied on the bed. He could feel the blood on his chest seep through his shirt and dyeing everything red.

Lilith sobbed and climbed on the bed. Once she was near enough, Lilith put her laps under Gabriel’s head.

She caressed his head while her tears wet his face.

Gabriel slowly raised his hand and began stroking her cheeks.

He made a weak smile while he looked directly in her eyes.

Lilith forced a smile and Gabriel closed his eyes.

She leaned down and kissed him, making him smile once again.

He heard Lilith say while everything became dark…

2 thoughts on “Coincidentally a God”